Setting the standard eh? All right… Rumor can do this... Umu!

Welcome to the Official Information Thread for Rumor's Stream! This is Rumor, or RumorGaming on Twitch, and the one that streams for the RumorGaming channel! Thank you very much for your interest and checking out Rumor's Information thread!

Rumor is a long-time gamer and a very avid anime fan!

Some of the earliest anime Rumor can remember is: "Card Captor Sakura", "Sailor Moon", "Gate Keepers 21", and "Sakura Wars". Currently, Rumor is playing catch up to a literal mountain of anime that is backlogged so badly Q_Q. Basically, Rumor is NUMEROUS seasons behind.

For the earliest games.... it was educational games on the PC (which taught Rumor basic math) and the Mickey Mouse/Donald Duck Disney game (Rumor chose the Duck more cuz it’s a Duck) on the Sega Genesis and remembers being scared by that side scrolling game "Alien" for the Genesis as well.

In terms of MMOs, Rumor has dabbled in many. Titles include... Runescape (died to a Rat QAQ), Maple Story, Ragnarok Online, Mabinogi, Trickster Online (Rumor has so many stories on this title... Nyxx and Noxx), Elsword, Grand Chase, Revelation Online, Skyforge, Fantasy Earth Zero, Twin Saga, Aura Kingdom, and, of course, Closers Online! There are definitely other MMOs that are not covered, so let’s cut it off here before the section becomes too big!

The handle name "Rumor" really came into being during a favor from Rumor's older sister (who’s handle name is usually "ShinononoTabane") who needed someone to cover for her. She was helping a certain publisher moderate their forum and in-game. However, during that time, she basically bit off more than she can chew and had too much on her plate o3o. So "Rumor" was born as the replacement for the "Super Genius". After a year of that, the handle name went back to storage, so to speak.

The handle "Rumor" made a return during the Closed Beta of Aura Kingdom (For those aware, remember the Aeria Chat Box? :P ). This continued through Rumor's time with Aeria Games and became a solid handle name that Rumor uses regularly

As for the name "Rumor" itself and the way that Rumor "talks/types" (surely, there is a lot of people wondering about that) ... Illeism is actually Rumor's way of honoring the source of the name "Rumor". According to the source material, this is how the text was translated! Admittedly, it is more along the lines of "[...] that is how the rumors goes. This Rumor, of course, isn't really too sure". It still works however.

It only really became a solid feature due to Rumor's curiosity of why illeism seem to make people irrationally mad and triggered. Never did get a straight answer for that... Rumor gave up on getting a straight answer. However, this way of speaking/typing stuck when under the handle name of "Rumor".

Currently, Rumor is set to stream Closers Online (almost) daily for everyone to enjoy and hang out!

Learning about Closers came about during the time when Rumor learned that LionsGate was partnering up with Gameforge GmbH to publish a certain game. This was way before the public announcement and Rumor knew it was practically iron clad. It was a sad day for Rumor. So, Rumor went looking around for a similar game and found Closers. Rumor mentally remembered it and gone on with Rumor's life.

Fast forward a bit, Rumor heard that En Masse Entertainment is doing a Closed Alpha testing for Closers. Not seeing the harm, Rumor signed up. Rumor never looked back. And here we are today!

Rumor is also a genderless neko slime on the internet o3o7

Rumor's personal nickname for Rumor's Twitch channel is the "Weird Neko Corner" But it can also just be called "Rumor's Stream Channel".

Apparently, the viewers have an unofficial nickname for themselves, "The Lewd Crew". Dunno why. Don't ask Rumor

Currently, Rumor streams lots of Closers! It is the main game for Rumor right now to be honest

So Rumor's channel can be called a "Closers Stream Channel"

Rumor’s goal is to ensure that everyone has a good and enjoyable time watching Rumor play the game that Rumor loves while interacting with other viewers and listening to some good songs to boot!

A bit of info!

Rumor plays the character Seulbi/Sylvi the most. She is Rumor's main character. Sub characters are Yuri, Levia, and with a long shot, Misteltein. J and Seha... Rumor just can't get them enough to play them.

As you already know, Rumor is a genderless being (neko slime, some would say), this means that Rumor streams without a face cam and all of Rumor's interaction with Rumor's viewers is through the ChatBox! It still works tho! 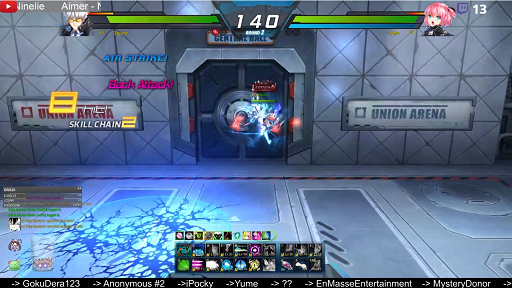 Rumor streams (almost) daily at an average of 2-4 hours on regular streams, and longer if Rumor streams earlier.

Rumor doesn't have a strict streaming schedule, as they say. However, there are some general time slots that Rumor does occupy

Please remember that Rumor is in Eastern Standard/Daylight Time

Please note that these times are to be considered the "General Streaming Schedule". Rumor still does have a life (this upcoming Sunday, Rumor is going to go and watch an anime movie at the theaters

) and works really hard for Rumor's workplace. So, deviations and what not is to be considered expected. 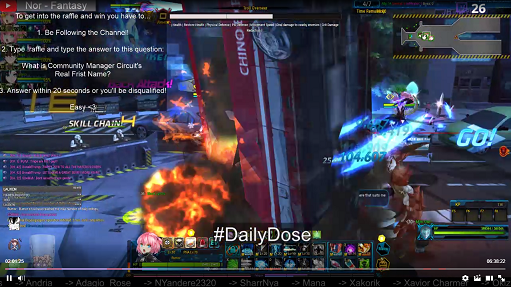 However, Rumor does try to stream daily so look out! Rumor will most likely be doing so sometime on that day

. Any cancellation of the stream will be announced on the Discord (more on that bellow).

Not really sure what else you guys would like to know!

If you have any more questions, please do not hesitate to reply!

Rumor does have a Discord! It is the Weird Neko Corner! Come hang out there and have fun with Rumor outside of the stream and the other viewers! Funny bots abound! Please just keep it Weeb-14!

Rumor does have a Youtube! However, it is mostly filled with videos of Rumor's Overwatch days. >.>;;

Rumor does have a Twitter! It is a shared account between Onee-sama (she doesn't use it tho) and Rumor!

Here are the links for them (and the Twitch):

Rumor will be announcing any events here too! So, keep an eye out!

Some Credit also to "Sean" at the Weird Neko Corner Discord for editing and suggesting things to add. Gao~! Tyvm