Idi0ticGenius
April 2017 edited April 2017 in TERA PC - General Discussion
I can't really call this a bug since it's mostly typo but if anyone noticed typos on Valkyrie glyphs and want to make sure what does what, refer to this spreadsheet I've made for the Valkyrie guide on Essential Mana: https://docs.google.com/spreadsheets/d/1zyXJAIhXTqlZJhXOUT-GTlGX6fZnnH6L255_oIXCyn0/edit?usp=sharing

I'm not sure if some of these are fixed but here's few examples: 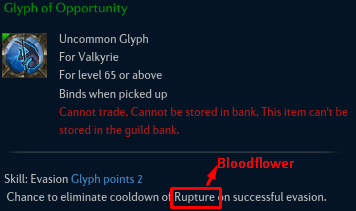 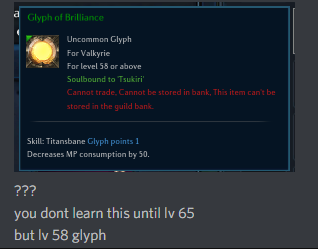 glyph for Level 65 skill "usable" at lv 58, but when you try to use it, it says you dont have the skill yet so you can't use it.
er... don't worry about the name, that's my Valkyrie.

Wrong description. It should be something like: Increase all attacks by 20% for 3 seconds on successful 3-hit combo. anyone noticed anything else with valkyrie skill/glyphs?
3