Forum Home› TERA PC - General Discussion
[TERA PC] Alert: Character transfers are temporarily unavailable. We appreciate your patience while we work to resolve an issue.
[TERA PC & CONSOLE] TERA’s annual summer celebration is back with a vengeance. Participate in Summerfest activities to earn tokens redeemable for costumes, consumables, mounts, and more! Details: https://bit.ly/tera_sf20
[TERA Console] We will be entering maintenance on Monday, August 3 at 7 p.m. PT, and have an expected downtime of 3 hours. For details and updates, please visit the following link: http://bit.ly/teraconsolemaintenance

This forum post will discuss and critique the recently updated battlegrounds rewards system that utilizes battleground coins as currency to buy the items in the shop listed below. 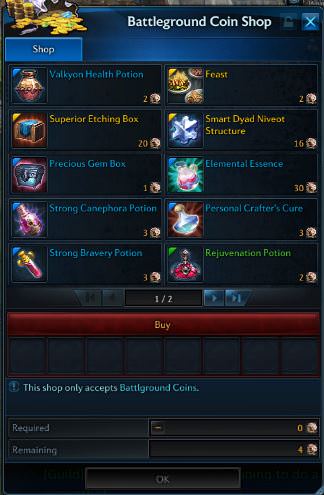 The Battleground/PvP urgently needs greater player participation. The proof is in the pudding. For instance, on any given day, there is typically only one que running per each battleground (CS or fraywind). Two ques of players is a rare occurrence. Slow BG ques = less players engaging in pvp. When only one que is running, this presents problems. Other players que and have to wait for the one que that is running to finish. If these said people que for a battleground right when the one que that is running begins their game, they could be waiting up to 15 minutes for fraywind or up to 24 minutes for corsairs stronghold to pop.
These battlegrounds require greater incentives/rewards to ensure that at least 2-3 ques of an instance are running.

The jackpot rewards system you had before with the five emeralds was balanced. If anything, it required a slight buff in order to incentivize battlegrounds a little more to promote player participation in these events. The nerf was entirely ironic, it is the direct opposite of what should’ve happened. I propose that you revert back to the old battleground jackpots and reimplement the battleground coins to be earned after successfully participating in any BG (regardless of win or loss). If any balancing needs to be done to the BG coin shop, this would be fair, but there was no justifiable reason to nerf battleground rewards or have changed them in the first place.

Thank you,
Skystrider from MT