The Current State of Tera

ShadowOfLight
October 2018 edited October 2018 in TERA PC - General Discussion
For those of you that don't know, DMCA stands for Digital Millennium Copyright Act

Denommenator’s recent official post states:
“We love you TERA players and we understand that you’re upset about this. We will investigate solutions that provide some of the benefits that these 3rd Party Services offered in a form that doesn’t violate our terms of service.”

To be honest, I think EME has been planning on this for a while:
Proxy has had mods that auto pop consumables for you when your hp/mp drop to a certain threshold.
Proxy also has mods to keep you within slaying range.
The release of both "On Fire Effect first release: August 17" and "Potion Pets: August 23" kind of raised my eyebrows, and I feel like maybe EME is genuinely trying to do something- that being said, I personally feel like its kind of late and it isn't enough.
However the biggest thing that leads me to believe that this was kind of in the making is this little number:

Pretty good timing overall on the DMCA request:
Server merge was September 17-18. From a business standpoint and being dead set on these bans, EME had enough common sense to merge the servers before they gave the official DMCA request rather than later. Imagine if they released a DMCA request and then told everyone they were going to merge servers. People would just think the game is dying. They also made it public on a Friday, which bought them an extra couple of days to rethink anything. If one was dedicated enough to their job, they could hop on the forums at their house look at a few comments and think of ways to counter it over the weekend. On top of this, they publicized the request 2 weeks away from Awakening Part 2, knowing that that would bring in people.

The biggest complaints so far:
Lack of transparency and out of touch with your player-base. As @Meningitis has wrote (several times on the DMCA post), you are completely out of touch with the people who play your game. When people bring up very real issues and threads such as the golden/silver talent issues, your community manager - who should know more about the game than most of your staff - gives a no-effort response that is completely wrong. The in game golden/silver talent economy before the DMCA post was absolutely trash and there has been no viable fix to it since the p2w strongbox jackpot event that happened at the beginning of the gear overhaul patch.
Server lag. This was the initial reason why people started using proxy. As a community, we've given you feedback for over a year now and you as a company and a publisher have proven you cannot fix it or make daddy BHS understand that it is a very real problem that affects your player-base. Your stance is gutting a lot of foreign players from your game.
Xigncode. This was the biggest push I've ever seen from EME to make a community use a third party program. It was utterly pointless. It didn't stop anyone from using anything and just slows down an already less than perfect game.
Not stopping actual cheaters. While by EME's definition in the ToS any third party program is a "cheat", the third party developers actually had pretty decent self-policing. On top of this, when people were stealing people's information, the devs of the third party programs offered more protection to their "player-base" than EME did theirs. EME could have just taken all the servers offline to keep everyone safe but they didn't and put everyone that didn't use some third party program at risk of having their information stolen.
DPS meter stance change. DPS meters were more of a tool than anything and EME even said it was okay as long as we weren't being jackoffs with it so not sure why the sudden stance flip. As someone who writes a guide for the game and mentors fellow valkyries, the dps meter really helps me personally.
EME's Stance on DPS Meters: 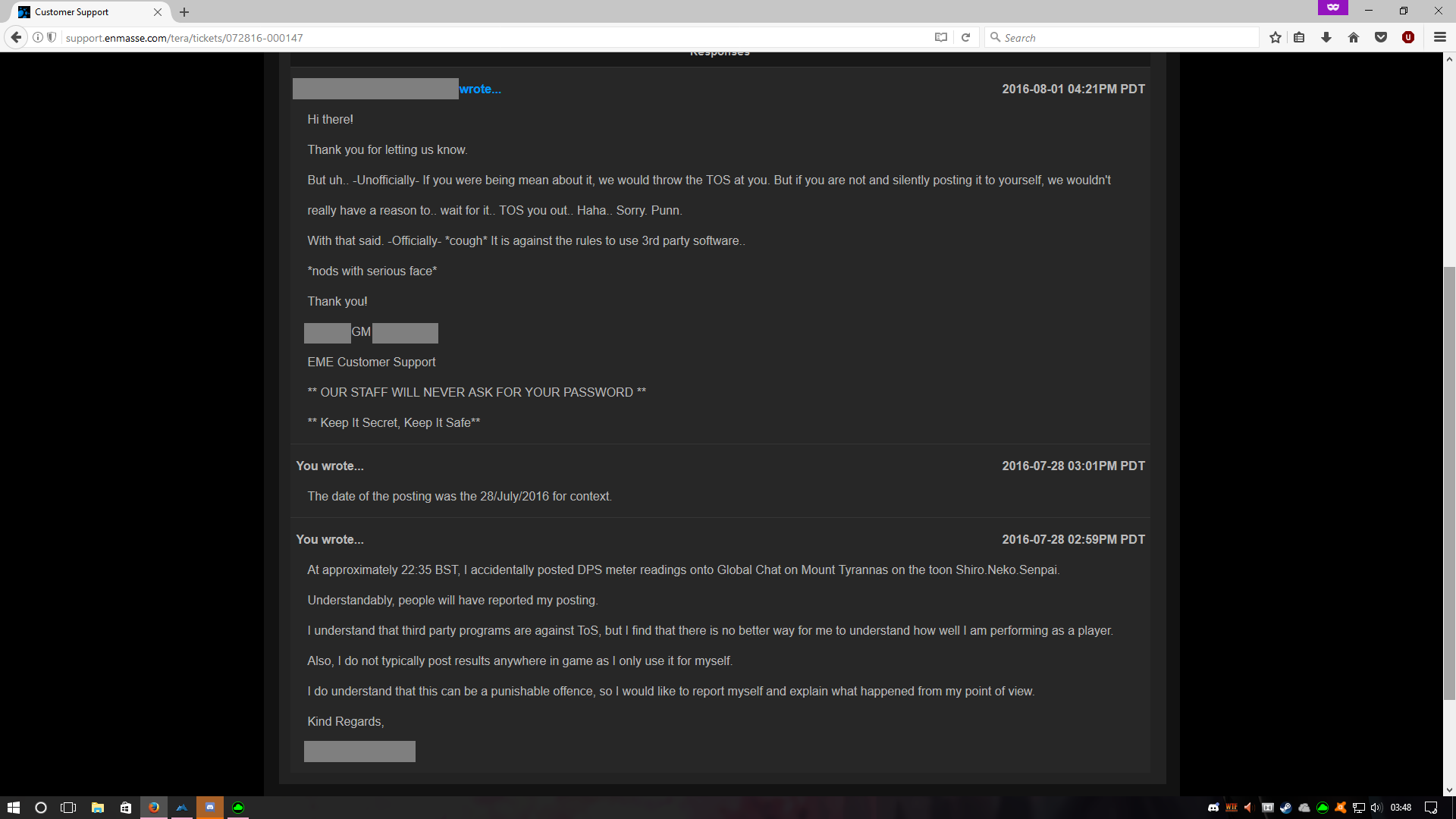 All in all, I think this was a mistake, but I don't work at EME or have any connections to daddy BHS. Its not like you could just pull off the DMCA request now anyways since that would be illegal and admitting you submitted a false request. I do look forward to awakening as I play valkyrie and they're getting awakened and I hope that whatever you guys are planning to offer to give us the "benefits of using third party programs" is worth it enough to renew my elite subscription.