UpperDown
October 2018 edited October 2018 in TERA PC - General Discussion
This is not meant to be an attack against EME or any of its staff despite occasional loss of temper control and poor choice of word on my part.


Well, for your convenience:

TL;DR - Good try, but not good enough. Why are you so stingy?
Give, us, more, Golden & Silver talents, without joking around like this.

I see that you guys have implemented another in-game event as of this morning.

I must say that I am impressed with your action as I would assume this was done in response to the cries of agony encircling the forum concerning the golden/silver talent shortage.
AWESOME! That's the first step - listening to your players. Let's forget about all the third party nonsense for a second and talk about this, since you've decided to finally respond to our feelings concerning these in-game materials.

With all that said, however, I am not in the least impressed with the level of understanding you've reached regarding your game TERA, what these materials do, and how much of them is stably and functionally appropriate.
It seems to me that you logged onto the game, searched the trade broker for these items and checked their priced and thought "Oh, these are expensive! Let's not give them too many, or the game economy will break!" ... Why so stingy?

TRUE! If you gave us too many of these, the economy will certainly become saturated. But that's where well thought and educated moderation comes? Okay, ain't nobody got time for education, right? STILL, it's better to have a saturated economy where everyone's loaded of them, geared up, playing more hours due to affordable gearing, spending more money on EMP instead of said materials, than a dead economy where no one has nearly enough to gear past Frostmetal without grinding their [filtered] off 24/7 and are therefore forced to quit. ****AND THIS IS FROM A TWO TIME FULL HEROIC OATH 6 YEAR EXPERIENCE PLAYER'S STANDPOINT.
Also, have you considered the possibility that these things are expensive due to its scarcity caused by the publisher?
By offering us the amount of 10 every TWO clears of a certain dungeon proves just how uninformed and uneducated you are about the very game you represent, yet again.
I held off calling you indifferent because clearly you tried. I appreciate your effort, but it's inconsiderately lacking.
Just take a look at this.

Really? 10? Forget the plates or darics(if you even know what I'm talking about) look at the golden talent one. x2 Kelivan's Dreadnaught for x10 talents? Why are you always so stingy?
I am not going to explain again. You go run the dungeon, legitimately after leveling up without your GM powers and instant full gear, then come back and tell me that's an appropriate amount for a reward.
We're going to ignore the additional random reward. But that's another of your addiction/problem - the love of RNG AKA gamble. You're in Seattle, not Vegas? Come on, we don't have time for that nonsense.
So... where are the silver talents? Do you think we melt the gold to get silver or something?
Do you even play the game?

It'd be understandable if our top tier gear was, say, Frostmetal or some junk. BUT IT IS NOT!
WE, HAVE, HEROIC OATH. Simply reaching that tier should reward players back a thousand golden plates in my opinion.
And between that and Frostmetal is the S**tormcry that requires an avg of 50 golden plates across all pieces per attempt. Then going from +9 S***crycry to Heroic requires an avg of 150 across all 4 pieces. Not to mention that Heroic +3 is coming with the Apex Part two patch, requiring more and more of golden talents.
And silver talents? 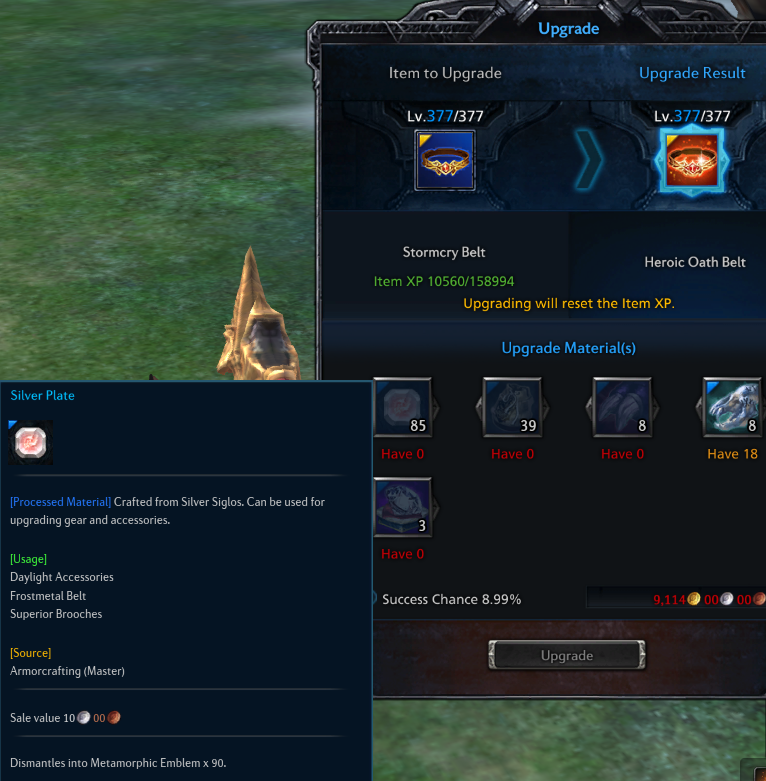 You've already introduced the next set of accessories, which requires an avg of 65 silver plates each attempt across *clears throat* SEVEN pieces. But you're completely neglecting the silver talents which is by far more in demand, and are giving us only golden ones.. ARE YOU KIDDING ME?
Are you following? I mean.. have you done the math and tried to understand the unreasonable difficulty you're creating for your players ever so unknowingly?
Even if you don't want to or just don't care, then flood us with these materials before going into your little bubble of not caring. Because either way you'll be destroying the economy, then why not choose the route where people are happier? Let us have something to live on and maybe we can make it out good and alive. Why so stingy?

But at this point, we will do it. Yes, we will take what we can get. But do you realize how pathetic and sad that is?
Your remaining players don't play your game for you (as a good publisher because you no longer are), nor for the game itself (active players and fun content are all gone and all grind thanks to you), but only because of some lingering affection for the game they love so much and are unable to leave behind. And what happens when those feelings fade away eventually?

Have we not told you, or tried to tell you enough of this problem? Why is it so hard to understand the fact that your players need more, like MORE of these resources?
We're not being greedy. We barely have any of it, how can we greed over it?
Do you not remember the golden and silver talent jackpot events and BAM spawn events you used to do regularly being the bloom and a huge hit in the community?

Please don't tell me that you see a few pages of said items on the broker and think that's enough.
Compare with TERA KR, TERA JP, TERA EU, TERA RU, and their tens, if not hundreds of pages of them, when your TERA NA now has the smallest population. Are we not ashamed of ourselves here? What's the point in giving your players more item XP, or gold (SEPARATELY by each week, too. What's that nonsense?), or anything at all, if we there's never enough of materials to use or spend it on? Why do you have to be so stingy, every time?

I hope my(our) frustrated cry will reach your ear, and get processed inside your head to help you make a more educated decision concerning the in-game resources.
Please, again, know that this was not meant to be an attack against EME or any of its staff.

I simply want you to wake up, stop being stingy; remember what you did right in the past, and do great again.